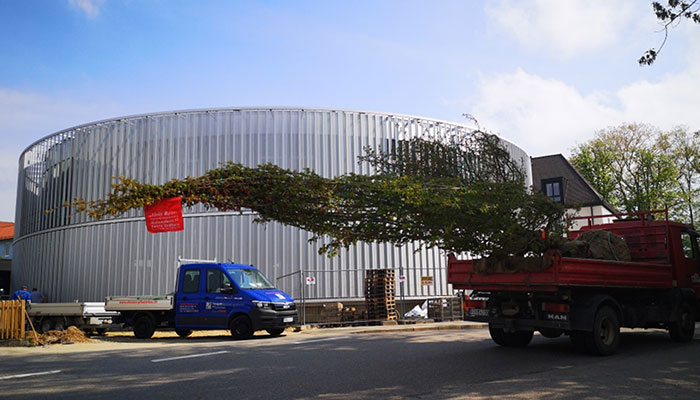 Moving house three times is as bad as a fire, as they say.
Benjamin Franklin coined the phrase in 1758, when it sounded a little different: “…three removes is as bad as a fire”.
Okay, it wasn’t actually that bad at MobiMedia. People who deal with software inherently have a structured approach and focus on the essentials. So, there was not much sorting out or decluttering to be done.
At last, the moving day had come. Packing the boxes, making plans about where things should go. That’s child’s play. We’d booked the advanced version: move, and at the same time carrying on working at 120%.

We pulled it off. But only because everyone was pulling together.
The network was set up, the technical access points defined, the workstations and tasks clarified. Thanks to our guys, the big tech was running absolutely perfectly before we even set foot in the new company. A huge thank you to everyone for their commitment, even at weekends! We realise that you went above and beyond!

Absolutely everyone pitched in, everybody helped out – just as they do every day in the company. Flat hierarchies are an advantage in this respect, because everyone gets involved and thinks for themselves.

Friday was the real moving day, when we toted boxes, set up new chairs and plugged in notebooks. We started at eight in the morning and at noon we were already enjoying pizzas together in our slippers. Between times we did some actual work, with customer workshops and new orders. No outsiders even noticed, since everything ran smoothly. Only our four-legged employees had to stay at home that day.

By the way, since people are always asking me: what about the Internet connection? Our Internet access was already fast before, but now it’s almost hypersonic. Thankyou to all those involved who made this possible for us – all the authorities, companies and colleagues.

As the saying goes:
Home is where the WiFi connects automatically…

Here are a few impressions of the day we took over number 2 at Dr.-Bayer-Straße:

In July we have interesting guests for the Pfarrkirchner Art and Museum Night. Then we also have a look behind the scenes for you. More on that next week.